Golden Mile Food Center is one of my places to dine. The place has countless street vendors and also attracts many young entrepreneurs who hope to attract the office crowds nearby. I’ve tried most of the stalls here, except for the newer ones that pop up between my visits. So when I first noticed a shutter Wen Li Taiwanese cuisine one weekend I knew I had to come back and try them properly. 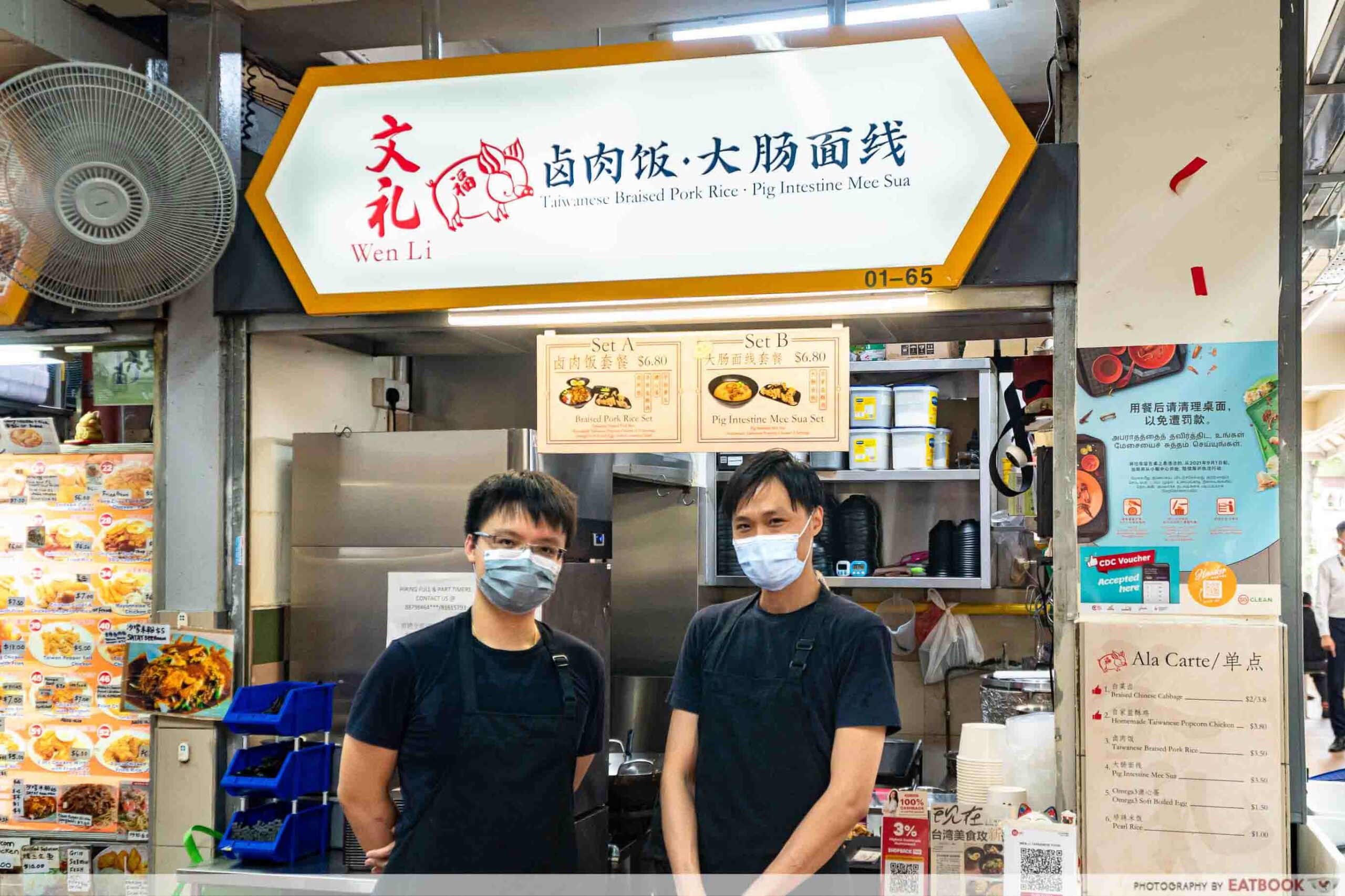 The seven-month stand is the brainchild of Joe Cheong and Donovan Wong, whose Chinese names, Wen Li and Jun Wen, respectively lend themselves to the store’s moniker. Although Wen Li Taiwanese Food is neither Joe nor Donovan’s first rodeo in the F&B industry, it is the first stand they own.

Of the two, Joe is the more outspoken partner, responsible for taking orders and managing customers, while Donovan is mostly behind the stove. The reason for this division of labor is simple: Donovan learned the recipe for his braised pork rice from a Taiwanese grandmother before opening his stall. 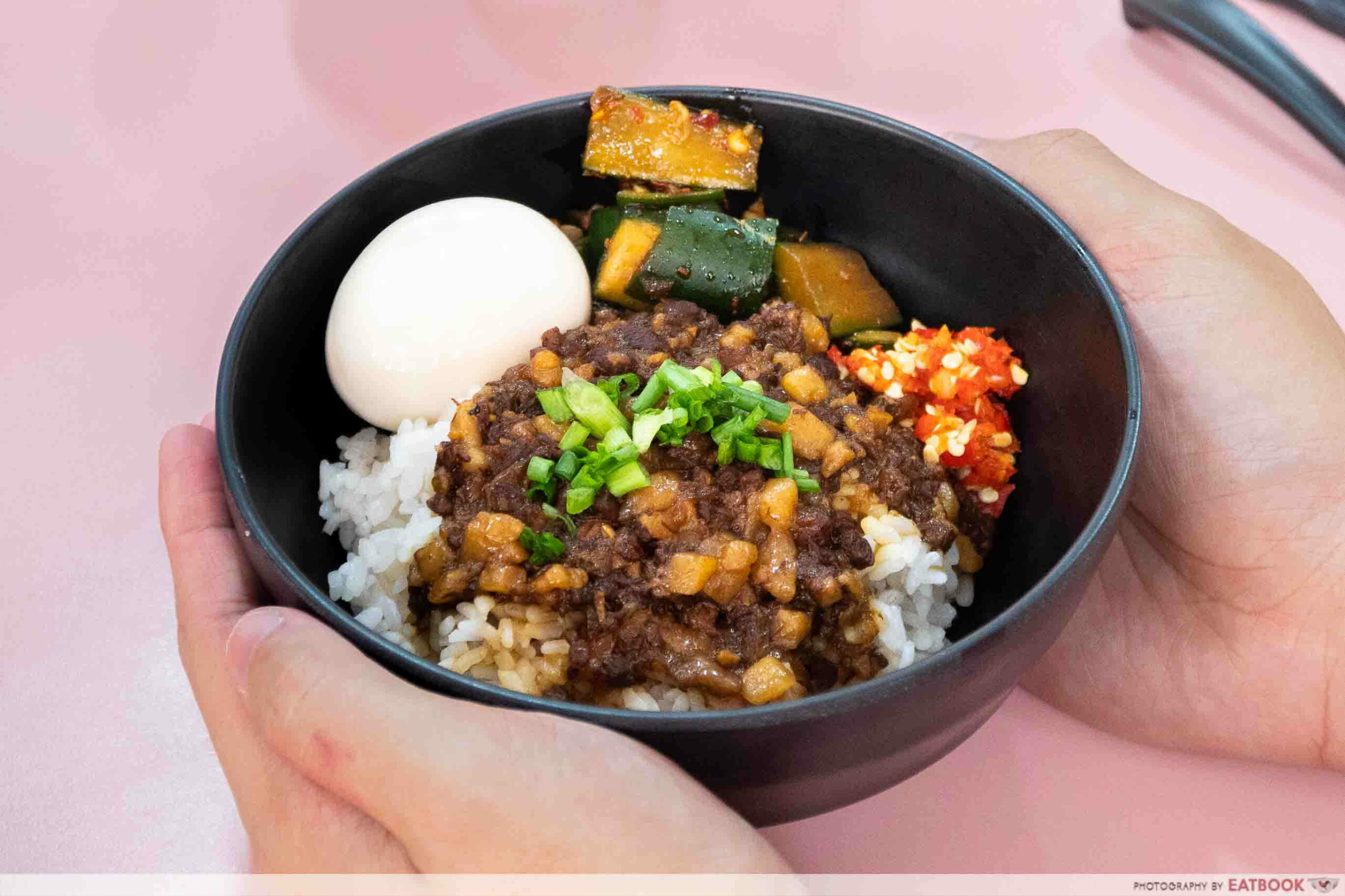 So we wasted no time eating the Braised Pork Rice Set ($6.80), which gives you a bowl of lu rou fan, a “jelly egg”, or “糖心蛋” as it is called in Chinese, a cucumber salad and a small portion of homemade Taiwanese popcorn chicken . That’s a lot of food for under $7 which made me a happy camper. If you’re not hungry, you can get the Taiwanese Braised Pork Rice à la carte only $3.50.

So I was extremely excited when I found out it was as good as claimed. The braised meat was remarkably fragrant and the flavor of the pork went well with the fluffy Taiwanese pearl rice. Don tells me it’s because they use a Taiwanese brand of soy sauce, which has a more refined flavor compared to the local offerings. 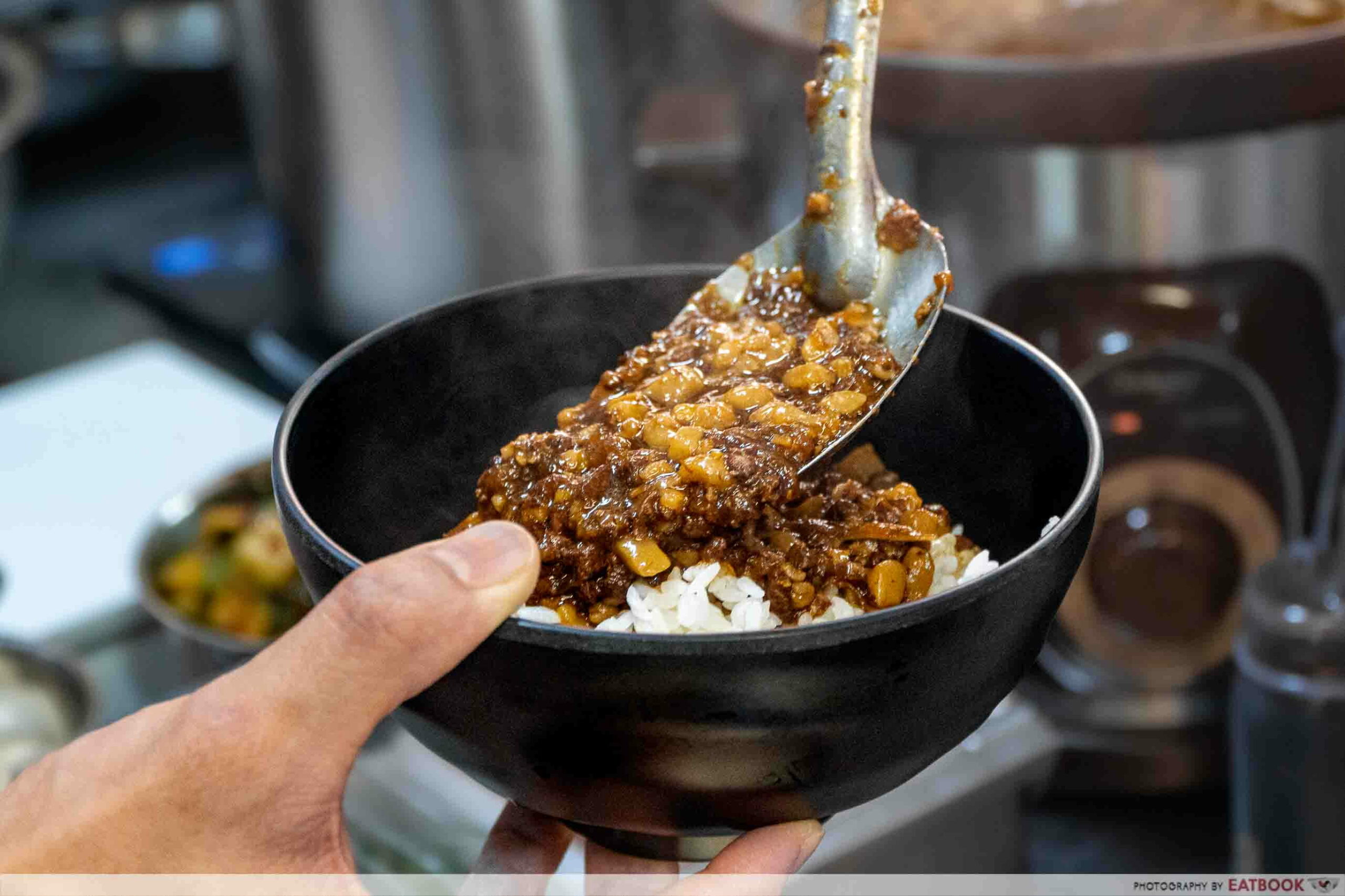 I also loved that the fatty meat and lean meat were separated, as it created a great textural contrast. For the health junkies, you can easily separate the lard from the meat, although I sincerely implore you not to.

Even though you can’t take too much spice, I highly recommend adding padi chilli to the braised pork rice bowl. There’s just something about the slight kick that makes the dish even more indulgent. 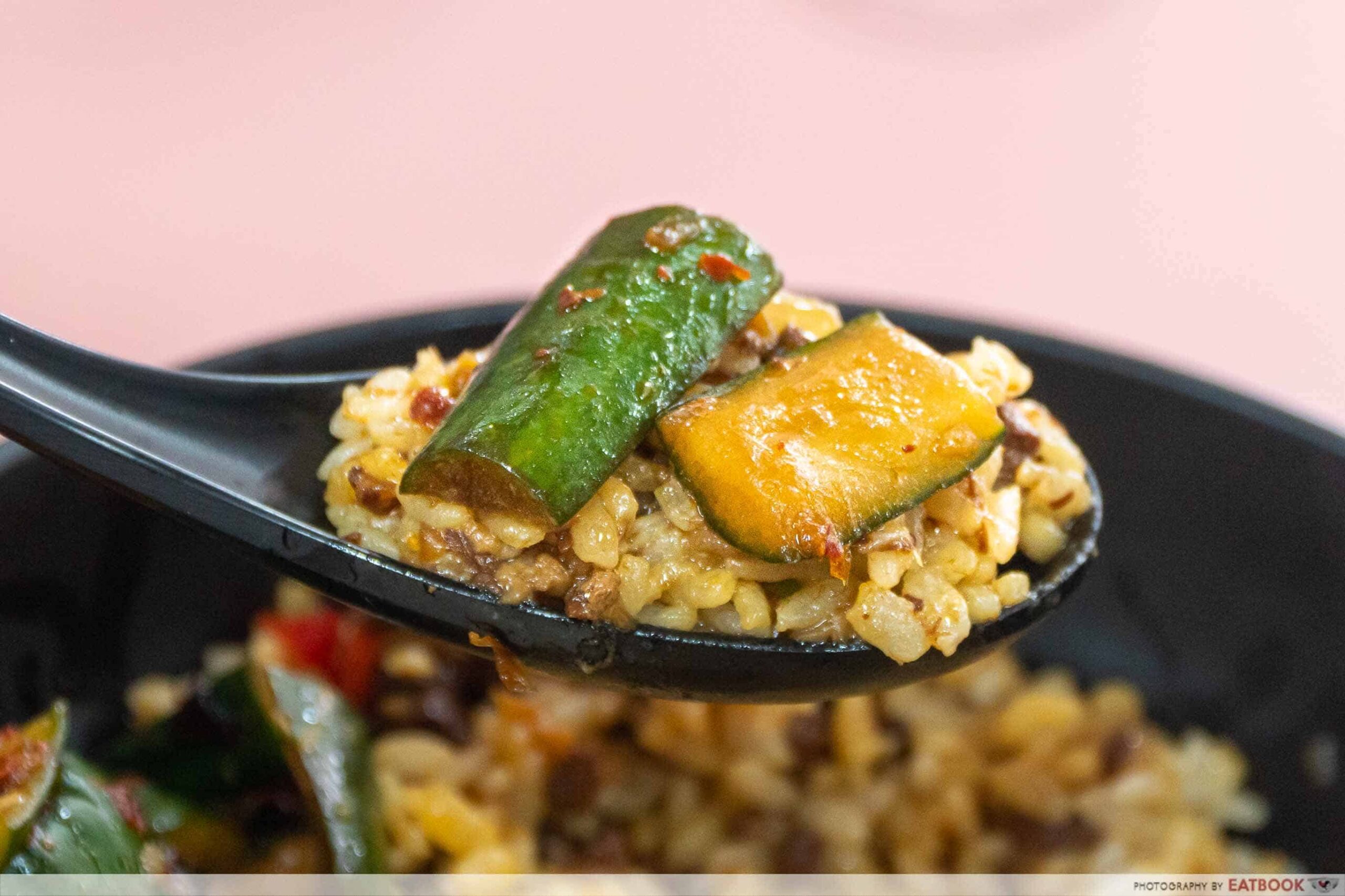 Since we ordered the set, our braised pork rice was topped with a chilled cucumber salad and a Boiled Egg Omega3what costs $1.50 all alone. The cucumber salad served as a refreshing crunch between bites, while the egg also presented a perfect cook. 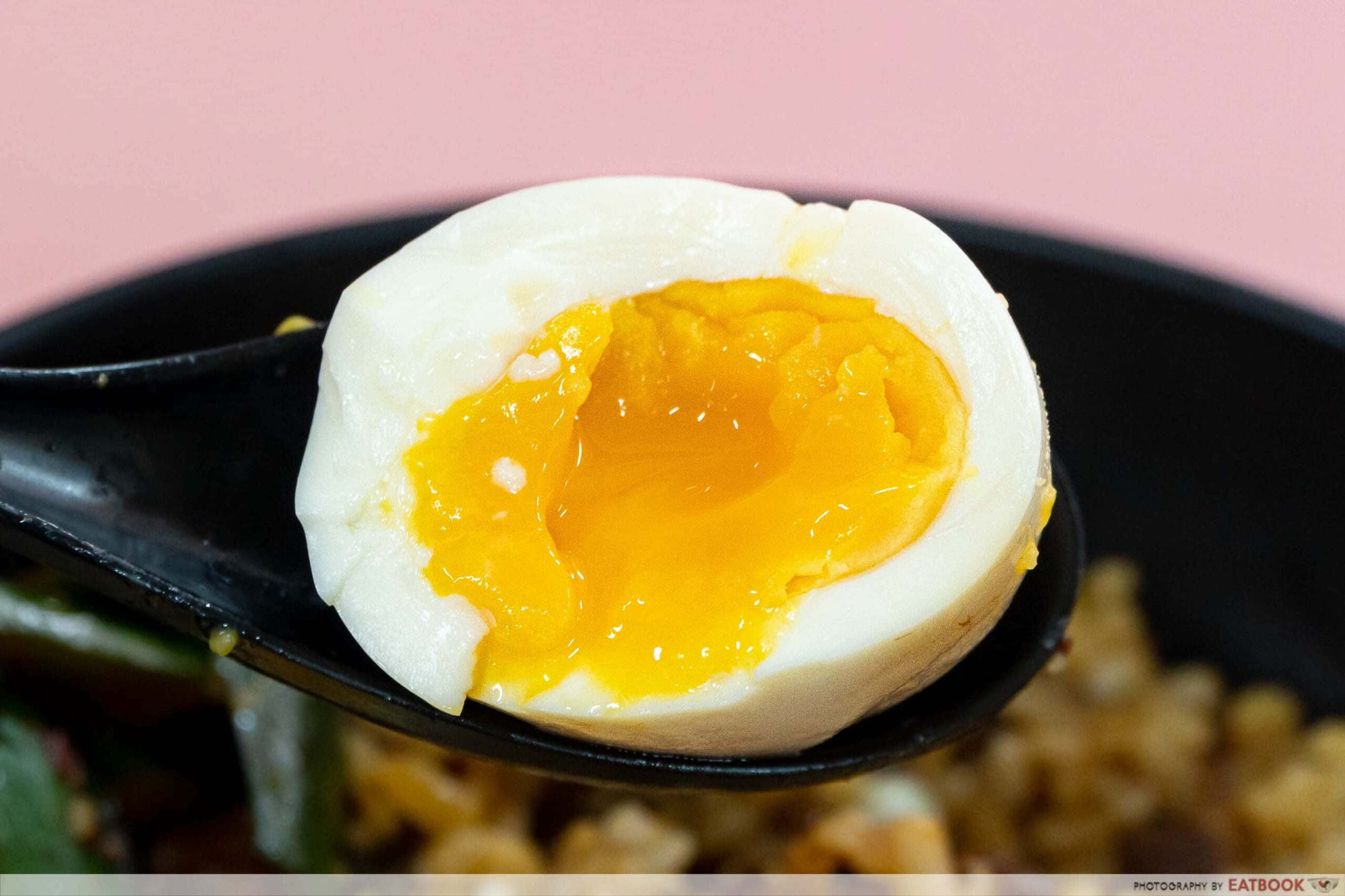 Personally, I thought the marinated stewed egg could have been saltier, but it could have been a conscious choice by Wen Li Taiwanese Food, since the braised pork was already tasty. 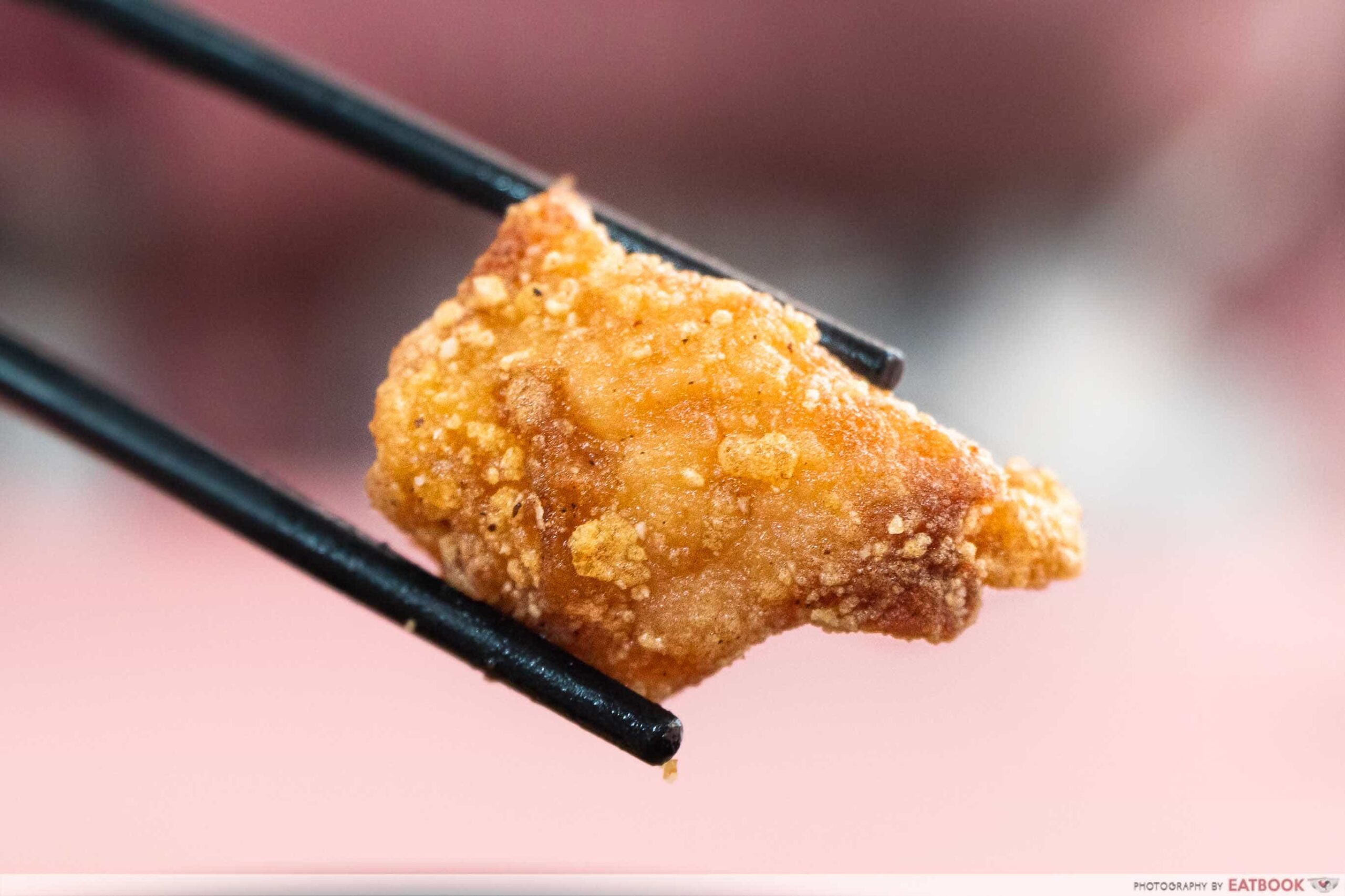 Moving on to popcorn chicken, the homemade snack was generously seasoned with salt and white pepper. Although I felt the popcorn chicken was a bit mealy, I really appreciated that it was homemade and fried to order. There’s no fancy way to eat mee sua – just sip it. Each bite was smooth and punchy with just the right amount of black vinegar, raw garlic and cilantro. As for the protein, the pork intestine has been thoroughly cleaned and very umami. 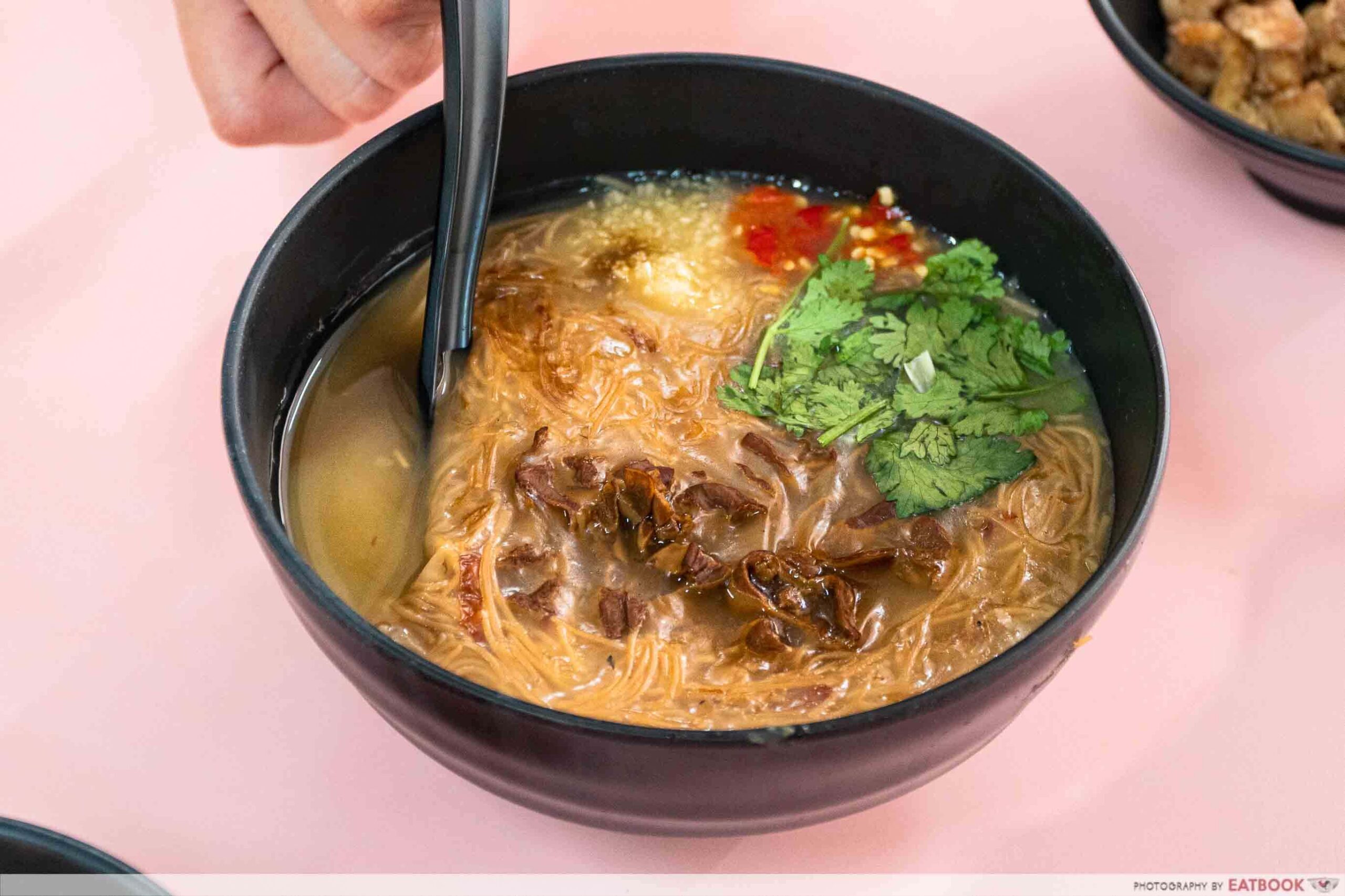 I wish the intestines weren’t sliced ​​so thinly, as I think that would have given the dish more bite. That said, the Pig Intestine Mee Sua is probably suitable for both young and old diners, as it is cooked for over two hours so it melts in your mouth.

If you don’t like pork intestines, Wen Li Taiwanese Food replaces them with pulled chicken. We didn’t manage to taste the chicken version of the mee sua, but we imagined it to be just as tasty. 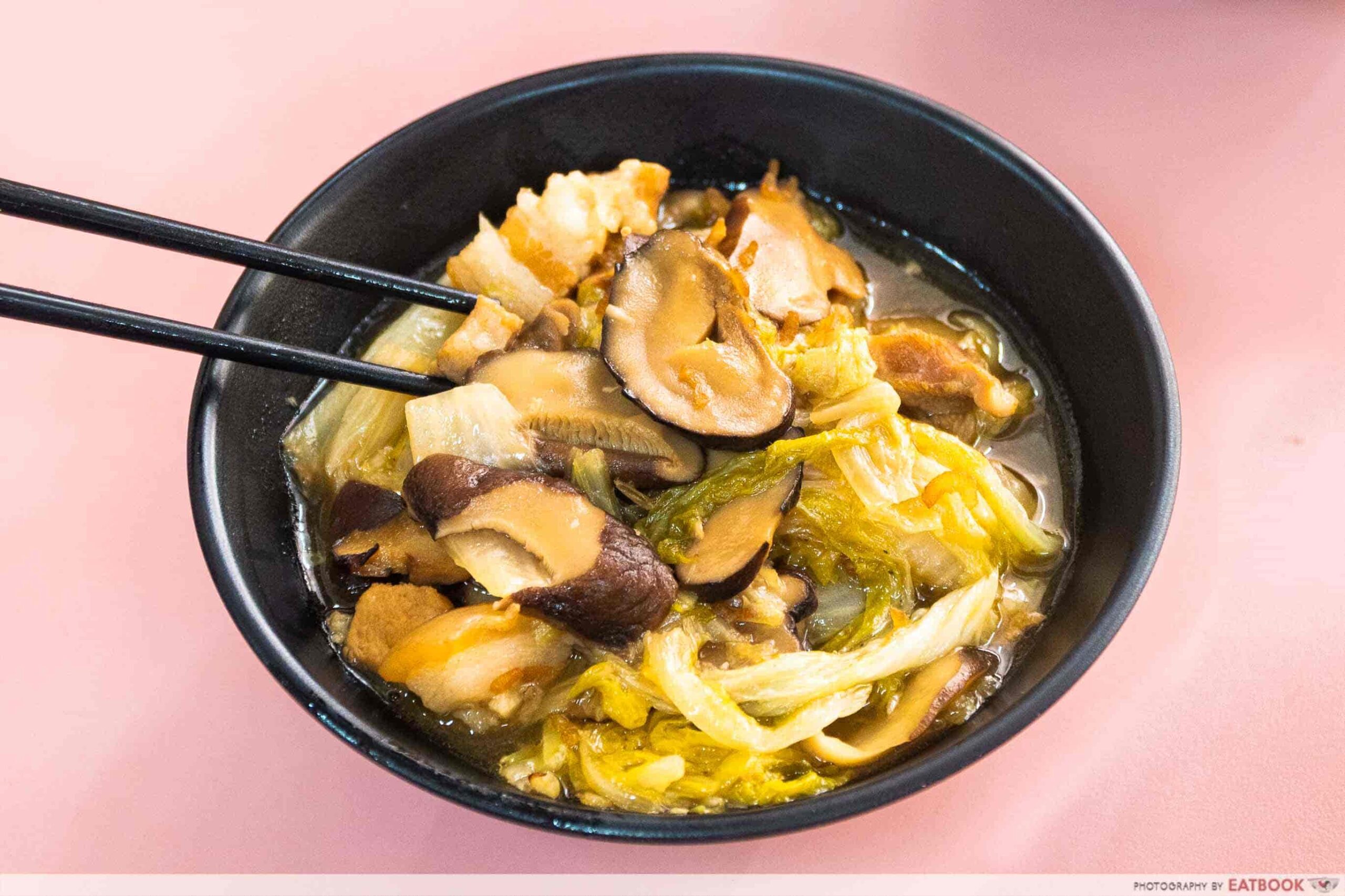 Unlike my colleague, I feel uncomfortable if I don’t have vegetables at every meal. So I ordered the Braised Chinese cabbage ($2) despite his protests. Although it didn’t look very appetizing, the dish was actually quite tasty.

For only $2, Braised Chinese Cabbage is a great value. You get chunks of pork belly and shiitake mushrooms from the pile of tender wombok, which makes eating the veggies less of a pain.

Wen Li Taiwanese Food is in front of Nicoll Highway MRT Stationbut if you take the Downtown Line instead, get off at Bugis MRT Station. There’s not much to say about the Golden Mile Food Center, but if for some reason you’ve never been there before, note that the hawker center spans two floors. 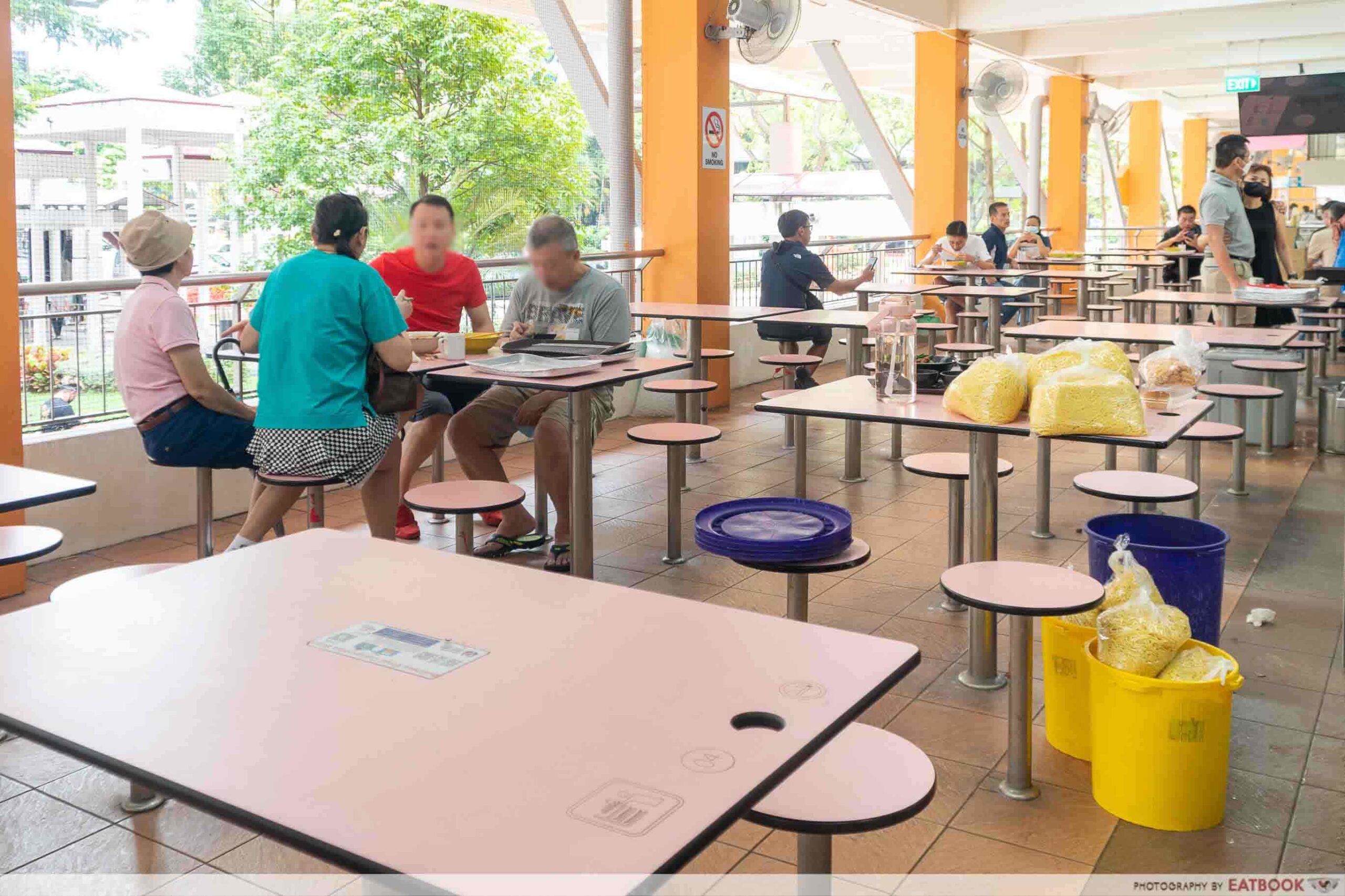 The Taiwanese food stall is on the first floor, near where YouFu Hokkien Prawn Mee is located. If it’s not too crowded, stay here to have your meal, we prefer it because it’s more airy.

You’ll also get a queue number when things get busy, although we’ve observed the lines aren’t very long. 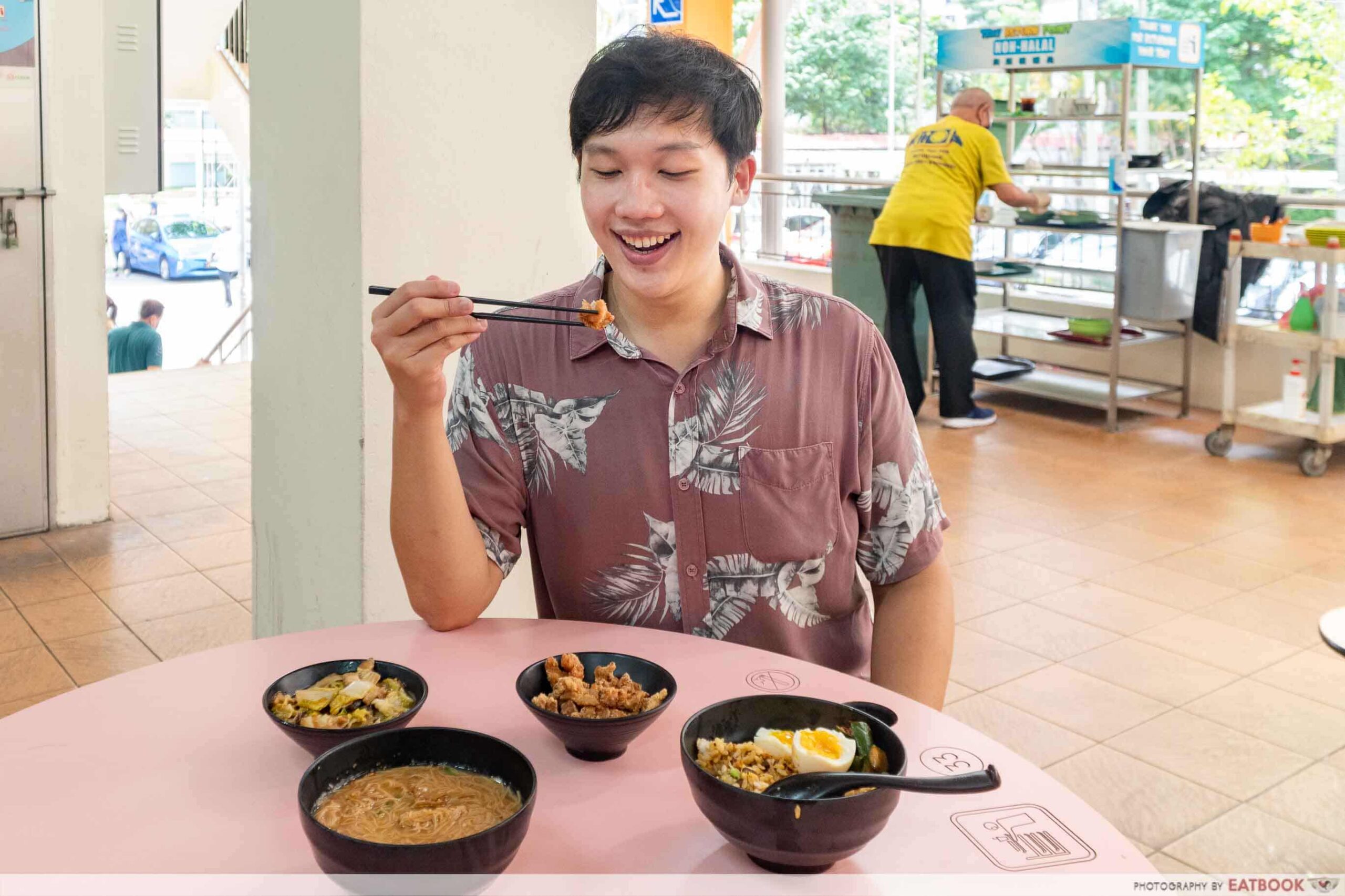 If you’re looking for affordable Taiwanese food in Singapore, Wen Li Taiwanese Food is the place to go. The food here is pretty decent, but it’s the affordable prices that make the stand a must-visit in my books. Hearty Braised Pork Rice for only $3.50 – it’s irresistible in itself.

Another Taiwanese food option that has been very popular recently is Food craving Taiwanese delights, which sells mee sua oysters for less than $10! If you’re looking for alternative stalls to frequent in Golden Mile, check out our Golden Mile Food Center Guide!

Photos taken by Tanya Tham.
This is an independent review by Eatbook.sg

– Value for money
– The popcorn chicken is fried to order

– Could have more pork intestine
– Egg could have been marinated more

Braised Chicken and Benefits of Donald Link’s Chefs for Ukraine

My wife recently found a recipe on the New York Times website by Donald Link. I’ll link to this recipe, but it requires a subscription and it’s also available elsewhere, including NOLA.com and Food 52, where there’s also a video. I really like the recipe because it’s totally Donald Link jam – layered flavors and […]

Braised country style pork ribs in brown sauce By Tracey Koch, Stephanie Riegel Photography by Amy Shutt September 7, 2021 country pork the ribs aren’t technically cut from the rib – they’re actually from the shoulder area of ​​the pork. They’re usually boneless, but you may find some that contain a bit […]

Sam Manning Spring is an opportunity to rework and lighten winter dishes. I’m cautiously advocating that it’s lazy weather outdoors again on Sunday lunchtime. I may be a little optimistic of myself, but damn it; I’m just grateful for the warmer weather. Contrary to perception, there aren’t many ingredients to play with in early spring. […]