Kin Men Seng Henga relatively new stand located on the second floor of Amoy Street Food Center, clearly believes in the preservation of tradition. After all, its sign proudly displays “Hokkien Braised Duck Since 1976,” and the menu tells the story of one of the co-owners’ grandfather, who invented the recipe on which the stall’s food is based. 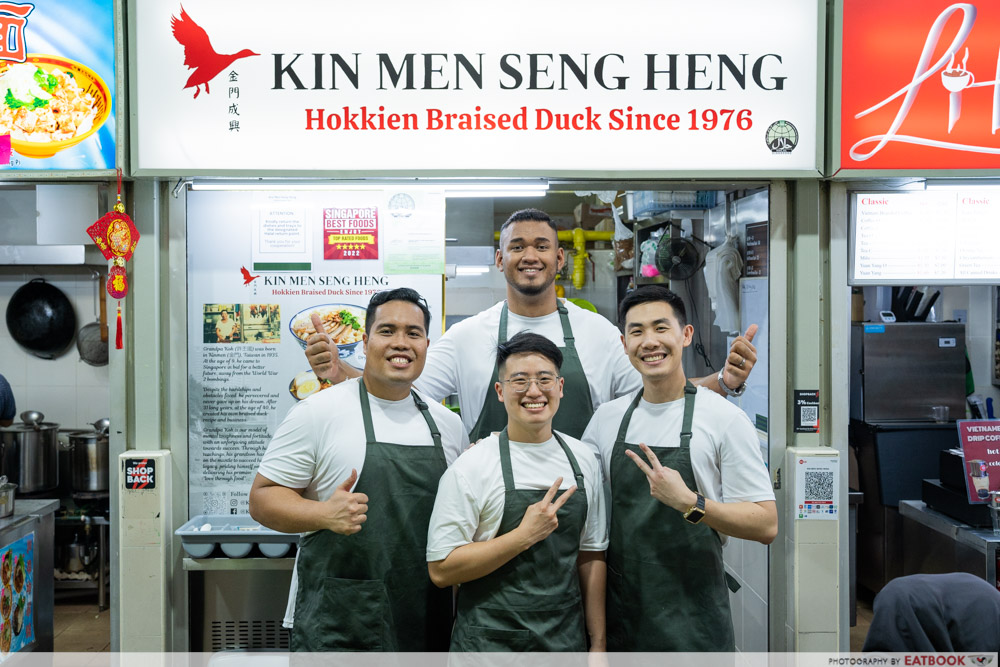 But that didn’t stop him from getting halal certification. The aforementioned co-owner tells us it’s because he promised his business partner, who is Muslim, that their first business together would be a halal stall. He held on and that’s how Kin Men Seng Heng was born.

The traditional but inclusive duck rice sounded good to my ears, so I headed over to the stall to give it a shot.

There are only three dishes you can order from Kin Men Seng Heng. Each one offers slices of the stall’s signature duck, but with different types of carbs: there’s rice, yellow noodles and kway teow. These cost $4 by themselves, but you can upgrade to the set that costs $6which includes tau pok, tau kwa and braised egg.

Anyway, we started with the Duck rice set ($6). It goes without saying that the duck itself is the most important component of duck rice, but unfortunately the slices we got were mixed up. Although I really enjoyed the savory braising, which had an aromatic herbal scent, the meat itself was a bit tough and dry. 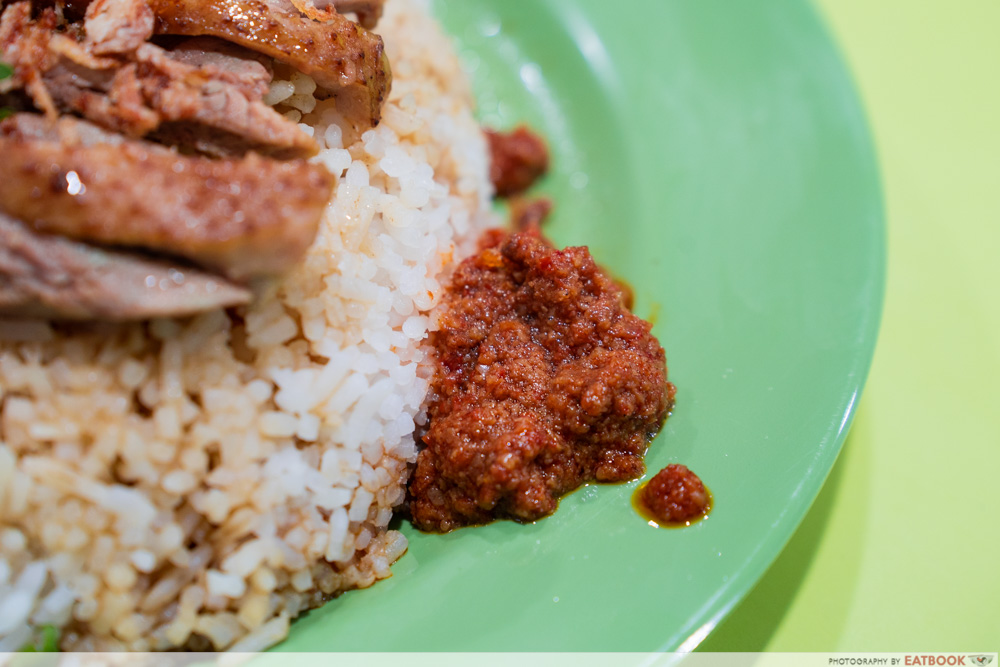 But when I added spice to the duck, the brilliant blend of zesty and herbal flavors helped me overlook the flaws in the meat, even momentarily. The chili paste had that gritty, almost sand-like texture, and boasted a noticeable spicy kick. 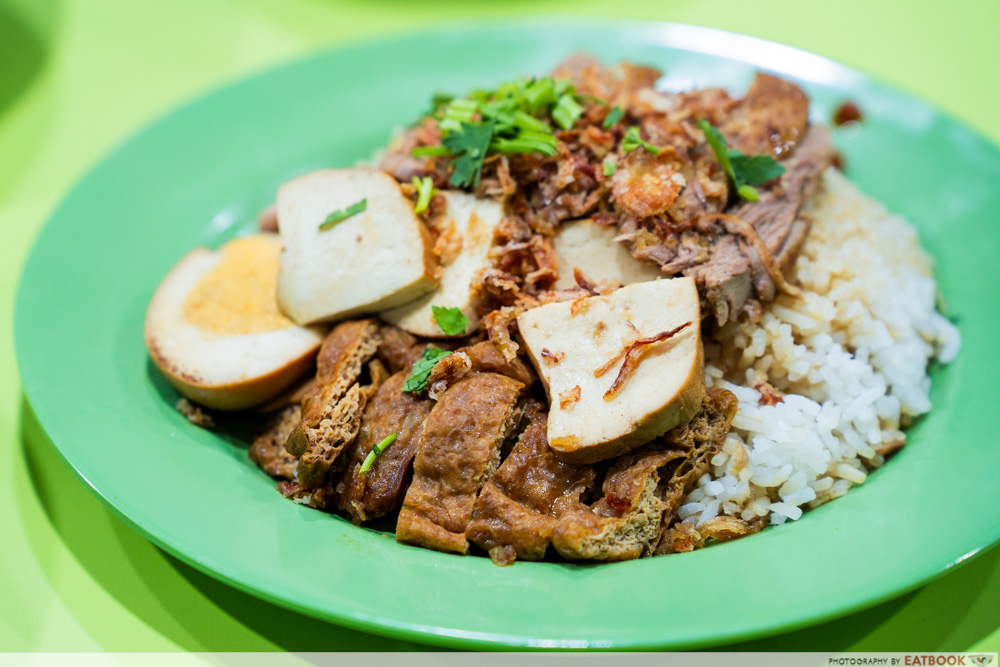 Since this plate was part of a set, it’s also worth talking about the other side dishes. The sweet tau pok and tau kwa worked as a pair, soaking up the braising sauce that would burst in your mouth when you bit into them. 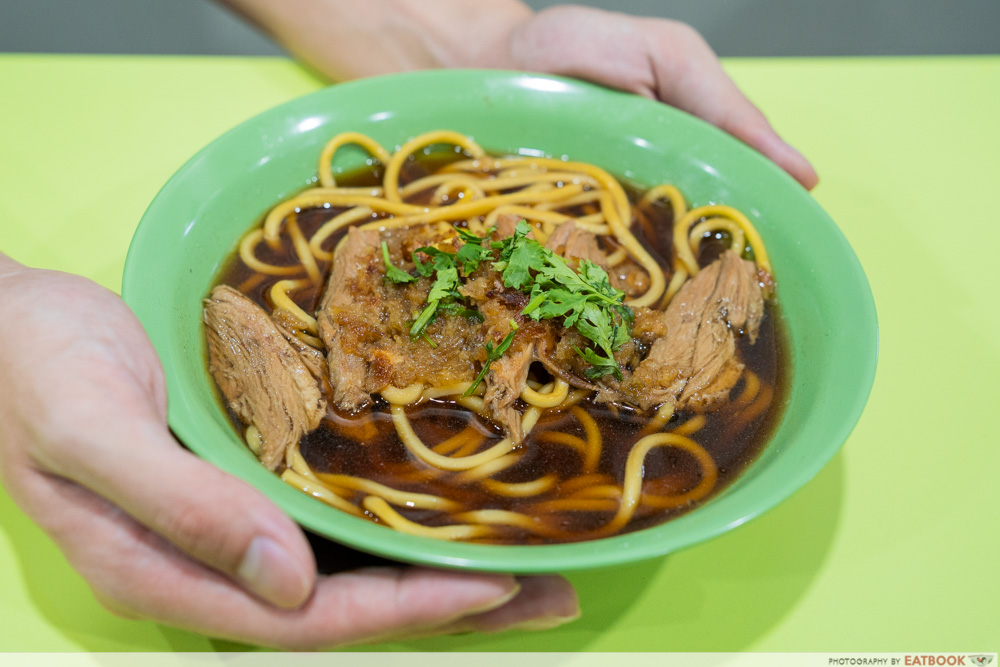 After trying Kin Men Seng Heng’s braised duck with plain white rice, we wanted to see how it would go with Yellow noodles and soup ($4). The soup, which was equal parts spicy and peppery, surprised me with its delicious flavor. As its characteristics somewhat resembled the braising sauce of the previous dish, the duck here retained much of what made it good before. 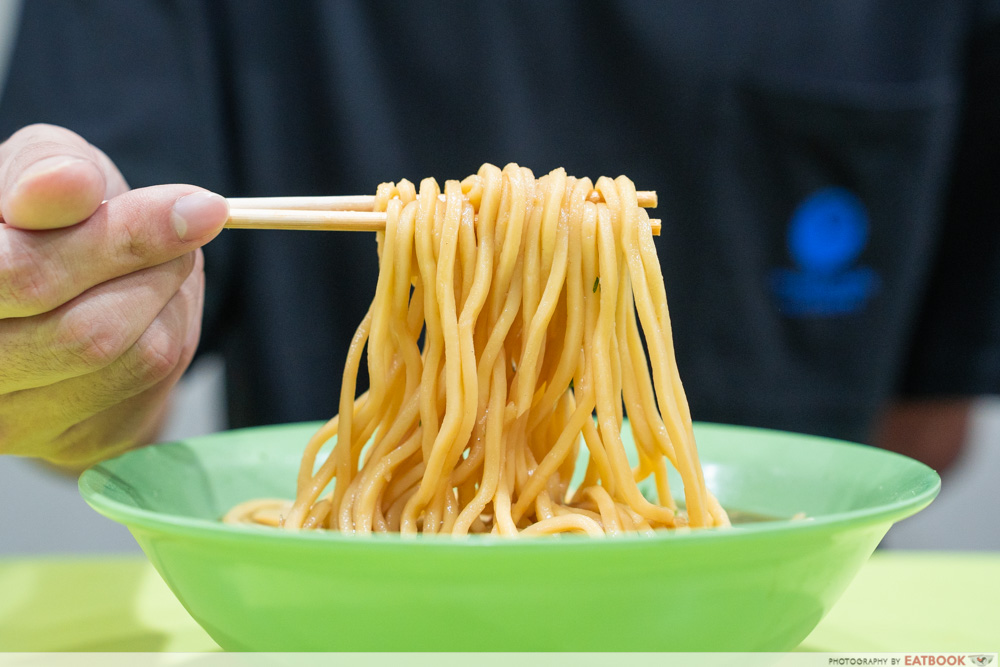 The yellow noodles, on the other hand, were very good. They were quite elastic and did not have a strong alkaline taste. 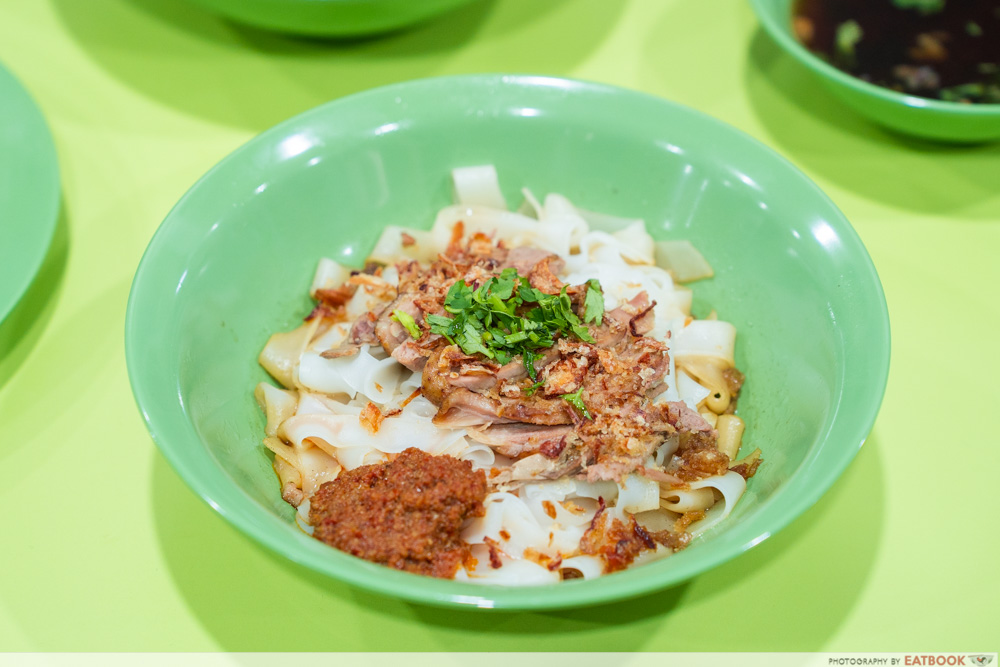 Since our previous bowl was wet noodles, we decided to get the Dry Kway Teow ($4) as the last dish. Instead, the herb soup from before was served separately, while the chili paste was layered on top of the heap of white, flat noodles. 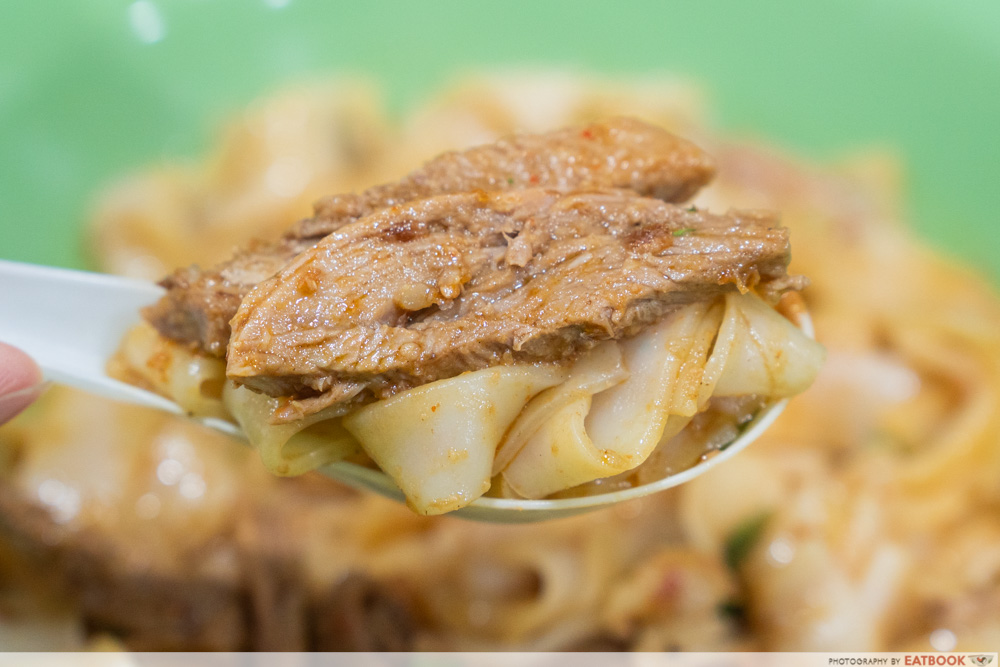 The kway teow noodles were remarkably smooth, and when coated in chilli and braising duck sauce, they tasted just as good. 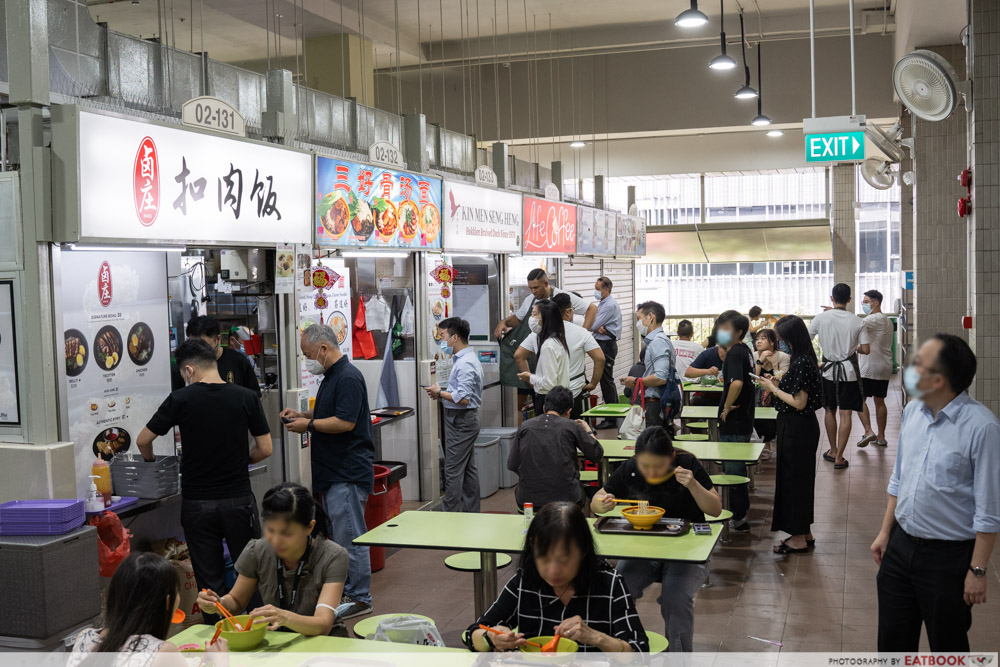 Kin Men Seng Heng is located on the second floor of the famous Amoy Street Food Center. It’s a spacious place to dine, but lunchtimes usually attract a lot of office workers and tourists. Get there early if you want to easily secure seats. 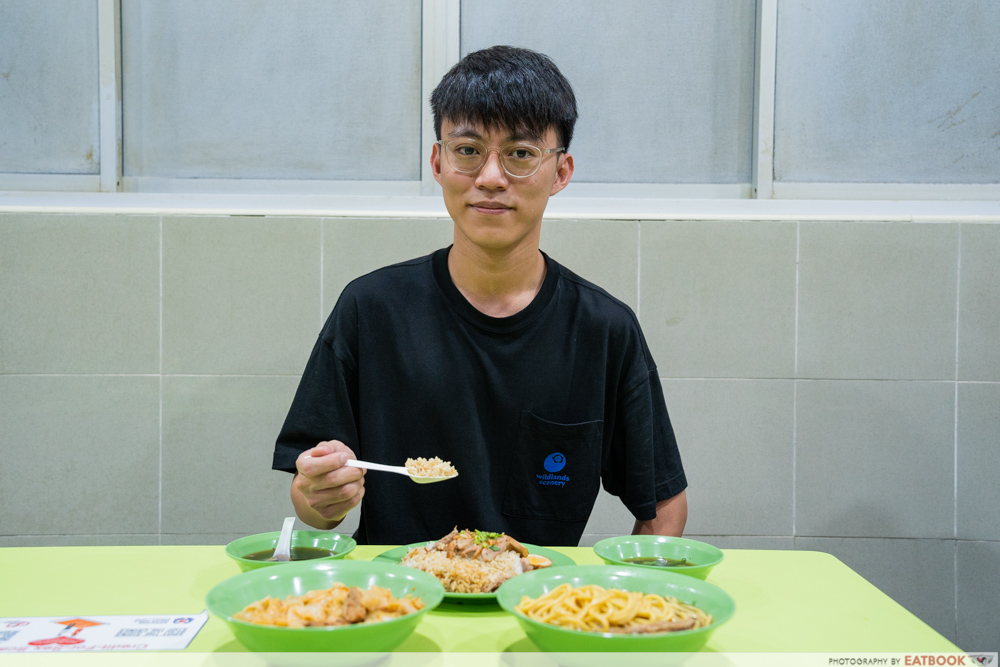 Overall, I enjoyed the flavors of Kin Men Seng Heng’s dishes. I enjoyed the delicious braised duck and the wonderful herbal soup, but was slightly disappointed with the tough meat. Still worth it, especially since there aren’t many such stalls that are also halal certified.

For another great duck rice stand to try, read our Ming Fa Duck Rice review. If you are an Indonesian bakmi fan, check out our KULON review.

Photos taken by Gan Guat.
This was an independent review by Eatbook.sg.

– The duck had a tasty braise
– The herbal soup was delicious

– The duck meat was a bit dry and tough

Prepare something hearty and special

Family dinner can be quick and easy, but sometimes you want to do something special. Often we take inspiration from what professional chefs do and it’s often easier than you think. This Old Fashioned Braised Steak recipe gives you a great opportunity to whip up something amazing for your family. This recipe is also great […]

The recipe for braised leeks with parmesan from Sam Mannering

Sam Manning Sam Mannering’s recipe calls for a specific amount of grated Parmesan: “batches.” Leek. This versatile vegetable is the stuff winter dreams are made of. I say side, but I would happily eat it as a complete dish on its own. A well-braised leek is a treat. Give it time and plenty of butter […]

Pop-Up Picks is a recurring series in The Post and Courier’s food section that features an upcoming breakfast, lunch or dinner pop-up and the chefs behind it. Adrian and Taylor Ion bring eclectic flavors to sandwiches, wraps, burgers and stews in their Braised & Glazed pop-ups, and they do it while working full time. The […]